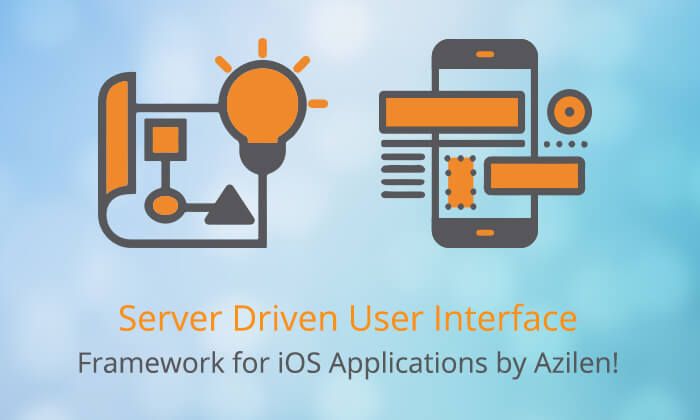 It’s a fact that a great user experience is resulted from dynamic content that is enhanced by dynamic presentation. This is what SDUI framework does- make UI presentation easier by eliminating the need of frequent updates for an application. SDUI framework is much like a Model-View-Presenter that assumes the functionality of the “middle-man”.

There are two fundamental challenges most of the app companies and developers are facing everyday:

App MVP – A Boon with a Time Factor

Lean development is a phenomenal proven beyond doubt. Product owner decides what will be the Minimum Viable functionalities to be added in an App to get user validating the idea and re-iterate the same sprint by sprint. That’s brilliant and works seamlessly and real-time for webapps. But for native Apps, it has a speed breaker (and sometimes may be as long as the entire sprint). This speed breaker is App approval process and app update from end user. App approval process for iOS takes avg. 2 weeks and if you are not lucky it may go well beyond that. Post app approval, the app is on the mercy of the end user to fire the update. Firing the update is becoming a rare event considering an avg. user installs 50 apps in the device and most of them keeps busy user’s notification bar for an update every alternate week.

So the app is ready with the learning just added in, but nothing can be done till the speed breaker is passed by. Put this in context of webapps and you know what a terrific waste of time and energy till you figure out actual usage statistic from end users.

There are various challenges for developers to create outstanding Apps in just a short period of time. Among them, there are several Apps that have the same business logic, but need specific UI changes as per the requirement of the end-user, especially in the B2B domain.

Briefly stating, there is always requirement of mapping app’s UI with the relevant end-user. This eliminates the redundant development of similar apps from the scratch each time with only minor UI changes. Ultimately, designing and developing the Apps according to the end-user’s need and making them more compatible to work on for every single user profile is still the biggest question for developers – which so far has not been perfectly answered..

The “Server Driven User Interface framework” viz. SDUI literally makes the above challenges obsolete by allowing dynamic UI updates as well as profile driven UI for each user. SDUI is built and deployed with just “one code base logic” and is applicable for each of the UI releases, while eliminating the need of frequent updates for the Apps.

The actual solution is described below:

SDUI maintains a UI database that parses UI data in the JSON and further stores it on a web server. Since the iOS native app calls appropriate JSON file through the web server, the UI of the App is as dynamic as the content itself.

User profile specific UI can be catered based on the login credentials, the web server calls the user information from the web server. In this process, the image and contents are fetched and parsed in the application in JSON itself.

Finally, with the help of SDUI kit framework, the App displays the final updated UI for the end user.

The key highlight of this solution is that the main business logic remains same for any of the User Profiles thereby saving considerable amount of time that is required for app updates. With the enhanced profile user interface, the user is able to view the products or items that are assigned to selected profile.

An Overview of SDUI Framework with Business Logic Interface

Why Azilen’s SDUI is Unique?

While there are quite a few platforms available where developers (or even non-technical users) can design and publish their apps – there is a need for a platform that can facilitate managing App UI with similar ease. Both startups and enterprises need to update their UI or better customize their UX in order to maintain their traction matrices.

The SDUI framework performs these relevant functions by going extra miles to meet the ever dynamic needs of the industry. The apps released through SDUI framework eliminate the need of redundant approval process. Instead it directly caters to the users as well as business real time. This ultimately results in the most dynamic and scalable app framework.

SDUI is aimed to create better and more personal experience for the end users while providing the developers the much needed customizing flexibility and agility in roll outs. With the huge spectrum of benefits to both sides – this Approach is as promising as the Tech behind it.