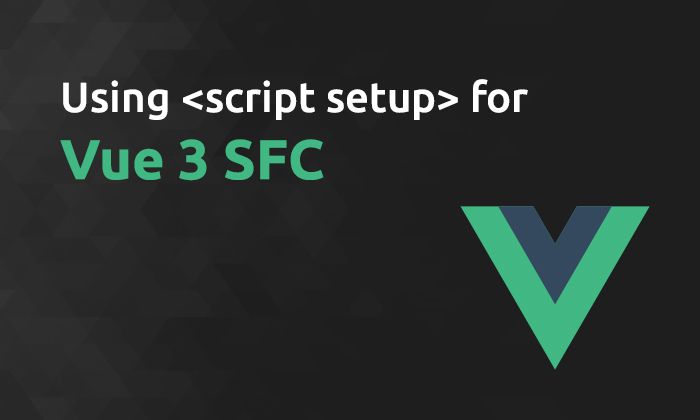 With Vue 3, it introduced a <script setup> feature. It is compile-time syntactic sugar for using Composition API in Single File Components. This syntax allows developers to define components without having to export anything from the JavaScript code block. It exposes all its top-level bindings to the template. Long story short, this syntax makes Single File Components simpler and makes you feel you’re working with native JavaScript code.

In the exact words of the RFC, “This proposal’s main goal is reducing the verbosity of Composition API usage inside Single File Components (SFCs) by directly exposing the context of <script setup> to the template.”

We only have to import the component to use them in a template, as the compiler automatically adds them to our application. We can use PascalCase or kebab-case for a component name in the template. However, PascalCase’s component names are strongly recommended for consistency. It also helps to differentiate from native custom elements.

(Image — 1) Use the components with <script setup>

The <script setup> exposes all its top-level bindings (including variables, methods, and imports) to the template. We can directly use an imported helper method in template expressions without having to expose it via the methods option. 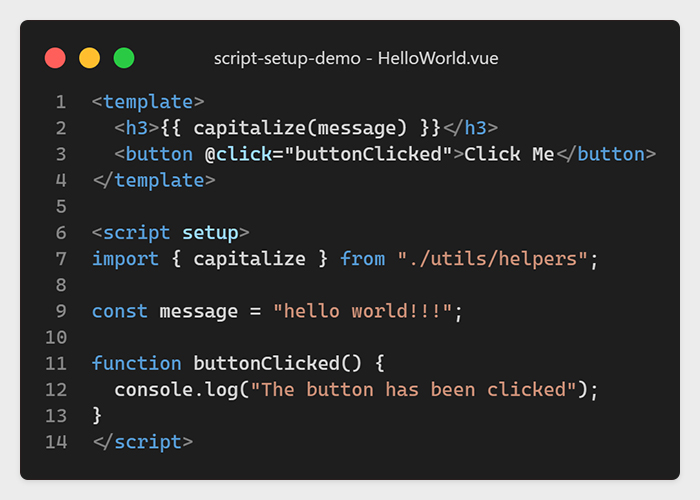 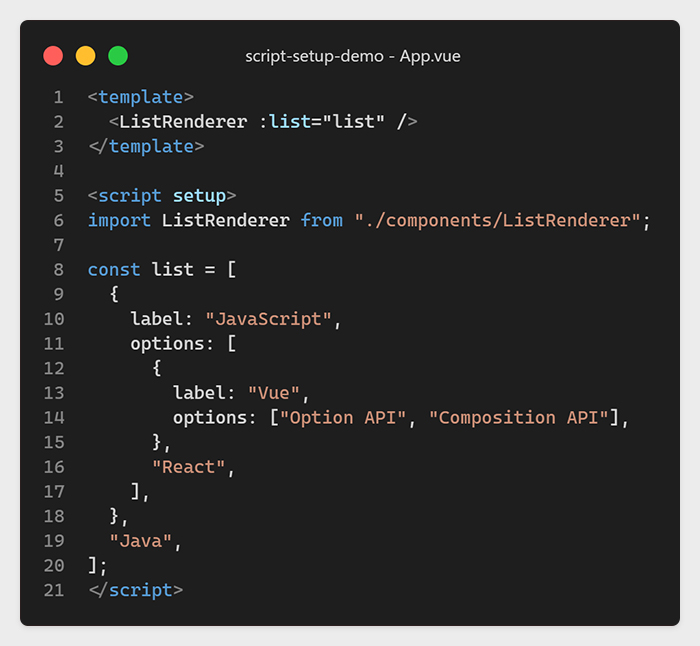 All imported components are referenced as variables, so we can use them with :is binding for dynamic component binding in a template. 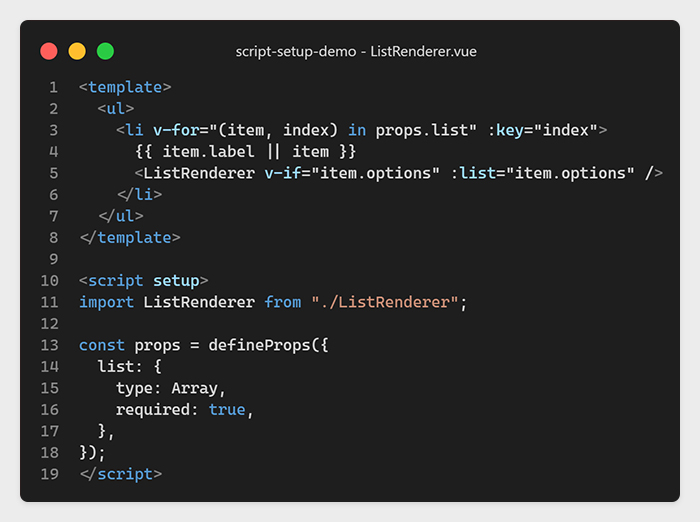 We can register for a lifecycle hook of the component by using onX methods, which we can import from the vue library.

A Reactive state needs to be created using Reactive APIs. For example, refs automatically unwrapped when referenced in the template.

To define emits, we need to use the defineEmits API method, which fully supports type inference. defineEmits accepts the same value as emits option. 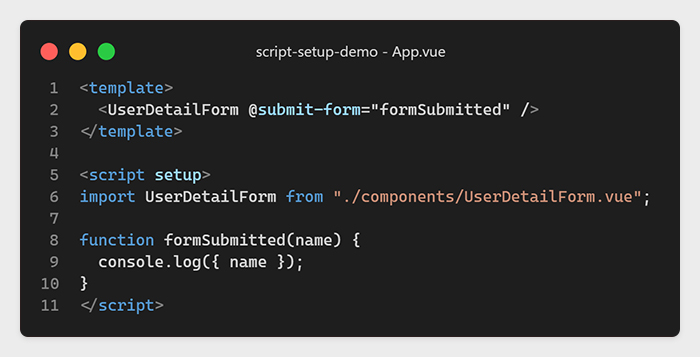 To define props, we need to use the defineProps API method, which fully supports type inference. defineProps accepts the same value as the props option. 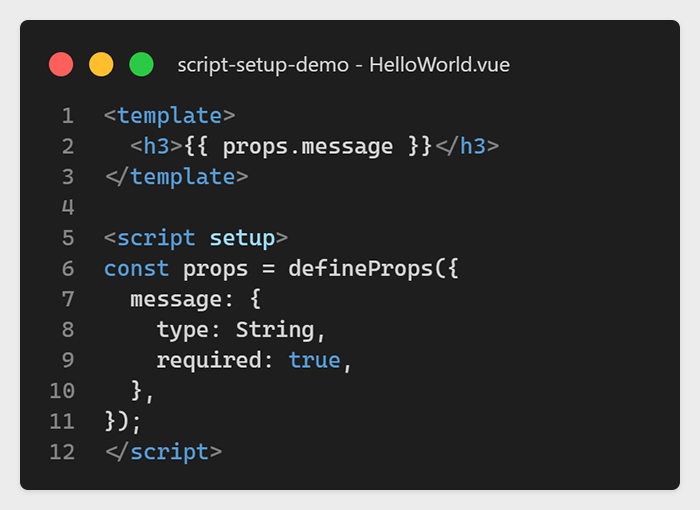 As per the official documentation, we do not need to import the defineProps and defineEmits inside <script setup>. However, you’ll face a no-undef error if you’ve used them without importing.

Below solutions can help you to overcome the no-undef issue:

Reacting to Changes with watch

We can react to data changes through the watch option provided by Vue. This is most useful when we want to perform asynchronous or expensive operations in response to changes. 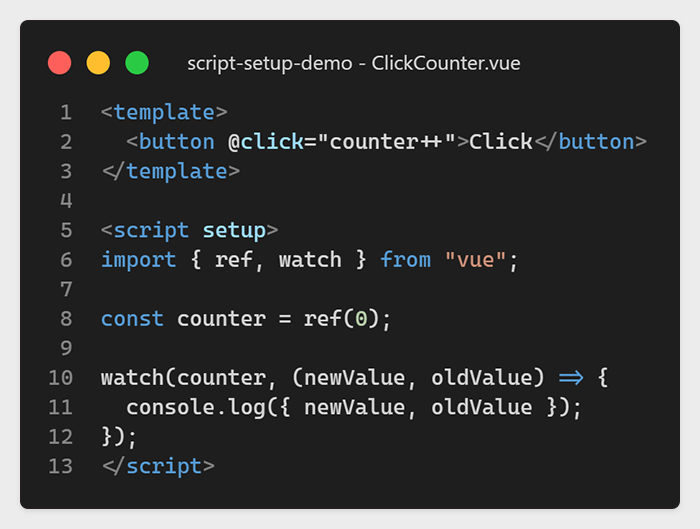 We can declare a computed property that automatically gets updated whenever, depending on property or data changed. 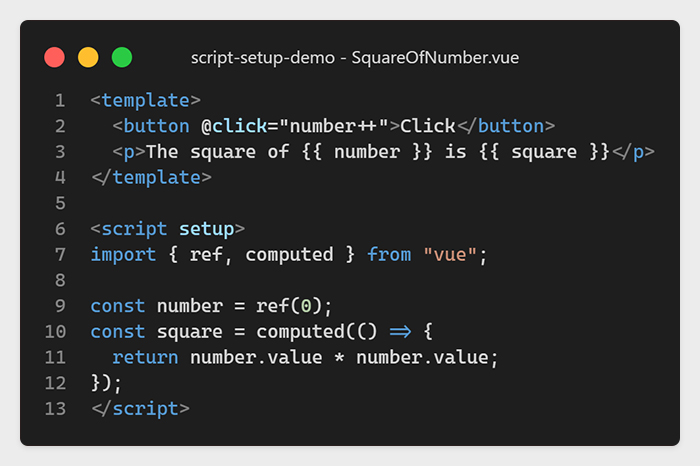 A <script setup> can be used alongside normal, <script> as the <script setup> creates its own scope for its top-level bindings. Vue will mix all together for you, so your Composition code and Options code remain separate.

A normal <script> is needed in certain cases when we require code that must be executed in module scope. Few pointers like below: