3D Touch: The Most Recent Functionality from Apple For iPhone 6S and 6S Plus
Mobile
by Editorial Team  February 4, 2016

3D Touch: The Most Recent Functionality from Apple For iPhone 6S and 6S Plus 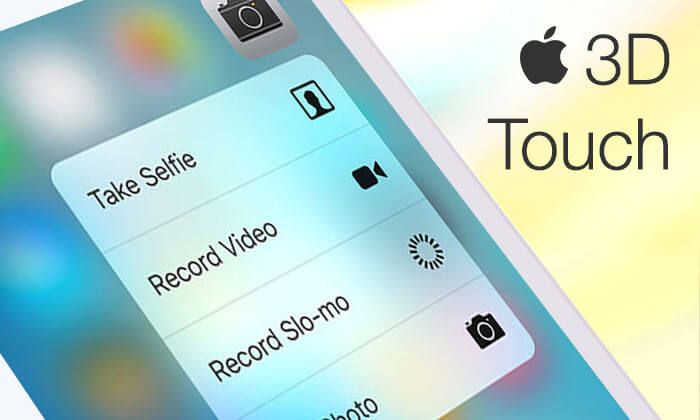 The “gadget king” Apple has always been accredited for providing its digital expertise to end users. Need not to mention, it has been known for its feature rich applications and functions through its devices so far. Further, it has always come up with its updated versions of devices adding more convenience and ease of use for the users. At present, the campaign is again in news for its recent released 3D touch technology.

So what is this all about?

Well, few days back Apple launched its upgraded versions of iPhones as 6s and 6s Plus. No sooner did these devices hit the mobile market, the users noticed a new encapsulated feature termed as 3D Touch technology. Paired with a Taptic Engine actuator, this feature will make your iPhone 6S and 6S Plus usage experience even better.

Your iPhone would now sense the amount of pressure that you apply on the display screen. You would also come across the features like Tap, Swipe and Pinch which are indeed common, but have been configured with multiple options. One of the many noticeable factors about 3D touch is that while being in operation, the iPhone will correspondingly respond with delicate taps to the users.

Not just one or two but there are arrays of enchanting and handy functionalities of this technology. Let’s take a look to some of them.

Whatever may be the application within your phone, using this function would help you to get the shortcut to its various specific features. All you need is to press firmly on app’s icon and this would start the Quick Actions functionality. Further, as the menu gets visible, tap to the shortcut of your preference and you would directly get into that feature.

This 3D Touch is executed inside an application. A gentle press on the function will open up a window thereby enabling you to “Peek” at the content. Tapping a bit more hard will allow you to view the actual content, which you looked as a preview. This method is known as “Pop”. Additionally, now your iBook also supports the 3D feature of Peek and Pop from the table of contents, your notes and bookmarks.

Transform your keypad into a trackpad by using 3D feature for your iPhone 6S and 6S Plus. And guess what? You will be able to use movable cursor on your phone. Hence, highlighting words in an email now becomes easier. Tap and hold anywhere in the keypad and move your fingers on the trackpad for the cursor.

Use the 3D Touch functionality on links that appear on iPhone to peek the content and you could then pop into Safari. Apart from this, being at Safari you could make the activities like visiting your most frequent pages, shared links, bookmarks and lots more. You will have the option to peep or preview everything and at the same time you could also pop into anything if you want to view in detail.

Earlier iPhones used to have the functionality to double tap the home button for calling the multitasking feature. But the users can now perform the same using 3D Touch. If you are a 6S and 6S Plus user, tap on the left side of the screen and you could navigate to the app switcher.

Cannot go with speed of 3D sensibility? Well, 3D Touch allows you to make adjustments as per your convenience. Moreover, if you are using this functionality for the first time, keeping the sensibility on light mode will help you get the experience of its working.

Apart from all peeks and pops, 3D Touch also encapsulates the functionality of drawing. This action is performed by actually reading the data from pressure sensitivity using which you could result to the tasks like calligraphy, painting and sketching diagrams and all these just by the movement of your finger.

With the introduction of 3D Touch through its iOS application development, Apple has once again proved its superiority in the smartphone industry. The function would certainly add convenience to users while operating their iPhone 6S and 6S Plus.