How Raspberry Pi Is Revamping the Nature of Hospitality IT ?
Enterprise,Mobile
by Harshit Daftary  March 28, 2017

How Raspberry Pi Is Revamping the Nature of Hospitality IT ? 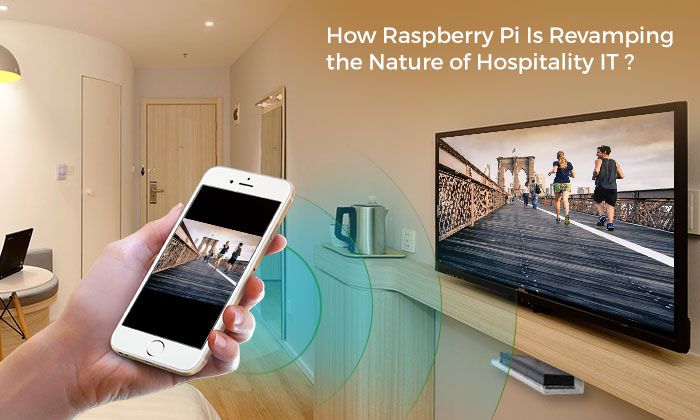 Technological advancements have changed the way we experience the life. It sounds reasonable to believe that up to certain extent the paradigms of civilization have got centralized around technology due to its huge penetration in each aspect of our day to day life including utilization of leisure time which has forced hospitality environments to fuel the tech injection in their routine operations.

One of the concerns gets encountered by hospitality IT was related to streaming the mobile app content to television.  The mobile device flooded with enormous number of applications, contents and images itself has established itself as a prodigious resource of information and entertainment and preferences of viewing those contents on television are drastically getting increased especially in hospitality environments as the users of applications such as Youtube, Netflix would find it more convenient to stream the application content to television through their mobile phones.

To match with customer preferences, business owners had two well-known options Chromecast and Apple TV and that’s where technological challenges stared taking place. The both well-known devices used for remote HDMI purpose have their own limitations.

As a solution, we created a system (Set Top Box) that contains Chromecast, Raspberry Pi and HDMI-CEC to achieve the desired goal. The Chromecast, RPi and Cable TV’s input are connected to HDMI-CEC. The RPi operates the HDMI-CEC’s switching operations. 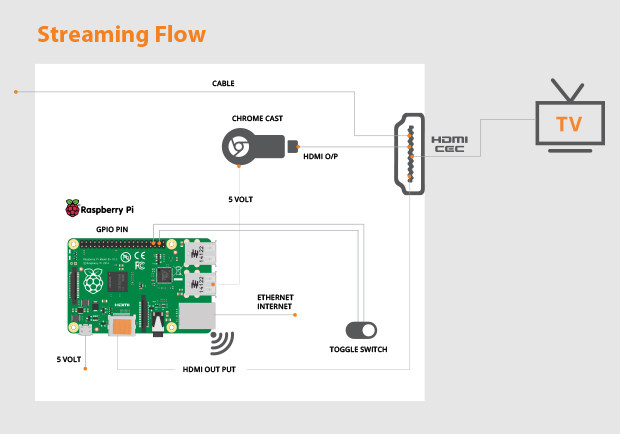 There is a toggle switch to change the mode of the system. By default the Cable output will be shown in TV. When the user presses the toggle button on set top box, the RPi will change the HDMI-CEC to show the output of RPi. The RPi will display step by step instructions on TV screen about “how to connect with Wi-Fi and stream content” to the user in an easy and effective manner. Once user gets connected with the RPi’s Wi-Fi, the RPi will automatically change the HDMI-CEC to show the output of Chromecast. To switch back to Cable TV mode, user will have to again press the toggle switch of the set top box. Below is the practical implementation of this idea. 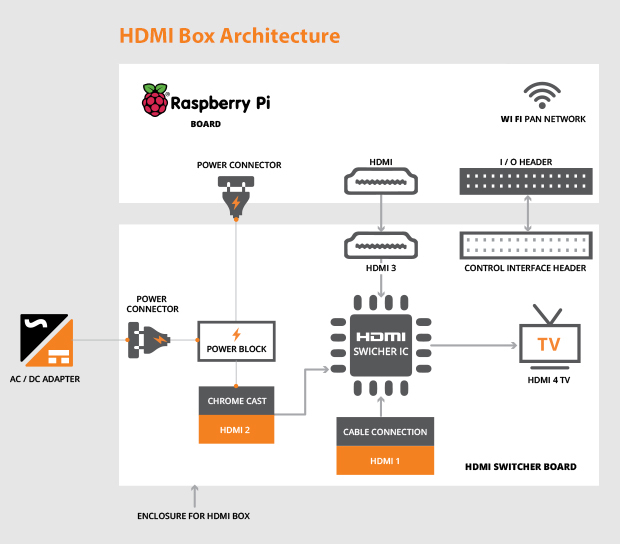 The Set Top Box is intended to allow user to connect multiple HDMI sources and switch the source to be fed to the HDMI input of the TV. It has architecture of 3 X 1 HDMI switch. It has a Chromecast device connected to one of the HDMI inputs, the Chromecast connects to a Wi-Fi hotspot created by the HDMI Box intended for restricted access, say for a hotel room. An additional HDMI port is available to connect any other source. Raspberry’s HDMI output will enable user to switch between 3 HDMIs effortlessly. It will display step by step guidelines on the TV screen so that user easily can follow the instructions and opt for desired HDMI.

How does the solution work?

By default, whenever user switch on the TV, by default local channels will be displayed. When it is desired to stream the contents from a mobile device, user needs to press “cast” button on STB which is a toggle button to toggle casting feature on and off. Once casting is on, the Raspberry Pi will switch its input to display step by step instructions on TV about how to connect mobile with Raspberry Pi’s PAN.

Once the user has connected his mobile to PAN of Raspberry Pi, raspberry will detect that a client is connected to the network and will switch the output to chrome cast’s input, to show relevant output on TV. User will have to press “cast” button from supporting mobile application. Youtube, Netflix, amazon and Hulu are well known supporting applications for casting.

Working over each little challenge with the combination of different technologies unlocks a spectacular opportunity to explore hidden potential of certain technologies to find out sensible solution that can dramatically change the user experience.