Television Takes a Technological Leap with an Inventive Apple TV 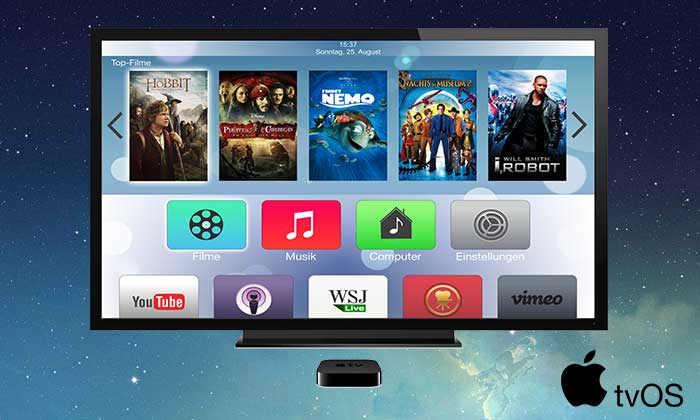 What is it that you look for the most when being stressed out sometimes from your work? It’s simple. Opting for some sources of recreation isn’t it? And you have got the options too. There are various modes of rejuvenation, some of which have existed since long. TV has been one of them. You have the options of surfing the channels to watch the shows of your interest.

Well, with the aid of technology and development in pursuit, television has stepped a level higher from what it is exactly now. Believe it; now you would have apps in your very own TV! Apple, the digital monster, has stepped into this sector by announcing the launch of its device Apple TV or the tvOS. Meaning, the aspects which were accessible through smartphones and tablets, now could also be accessed through your television!

With its powerful tvOS and various ingenious applications created by the developers, you could get more from your television which would include games, shopping, interactive classes and likewise. One just couldn’t predict what astounding applications developers might create for their new devices. Now as these features have been exhibited by the campaign, hence it won’t be an exaggeration if said that you could personalize your television.

The skilled engineers from Apple have implemented various techno sources along with tvOS SDK to make this device highly operational.

Consequently, one could find the kit equipped with several specifications. Just take a look to some of them-

Other than that, Apple has priced its tvOS as- $149 and $199 for 32GB and 64GB models, respectively. In addition, it is likely to be released during late October but provided developers access to the tvOS SDK immediately

This technology has attracted various developers working on iOS platform. Besides, it has also provided an incredible gateway for the developers to create imaginative and useful applications for the users, regardless of the sectors. Further, if you are into developing any sort of application on iOS for Apple TV, you need to download Xcode 7.1 from the developer center. Meanwhile, this is a beta version of Xcode that supports tvOS along with tvOS Simulator.

Apart from these, you also have the option to install Xcode 7.1 beta along with Xcode 7 as per requirements.

Moreover, Apple instigates two methods of developing apps on tvOS which include-

TVML Apps–
It’s completely new concept of development process as it uses TVMLKit with TVML and TVJS. In general TVML refers to Television Mark Up Language, one of the initial methods of making apps. On the same suite, TVJS refers to the set of JavaScript APIs that lays the platform for displaying apps designed with TVML. TVMLkit on the other hand is used along with TVML, JavaScript and native tvOS application.

Custom Apps– The kind of frameworks and concepts used are exactly same as known to an iOS developer (e.g. UIKit, AutoLayout, Storyboards). Additionally, it could also be used for completely immersive experience in the application. Using this feature, the user would be able to spend more time interacting with the interface rather than opting for content either visually or through an audio.

The Apple TV Remote with a Difference-

Of course, like other modern generation televisions, the Apple TV too comes with a remote to control its functions.

Now just hold on! What flashes into mind when you come across the word “remote”?

A case with certain engraved buttons is what anyone would answer. Indeed that’s true, but the remote designed for Apple TV comes with uniqueness. It has been designed with touch interface and could be operated just the way you operate your smartphones, tablets and other touch devices. Sounds interesting right? But it’s true.

Want to change the channel? Use your thumb to swipe the touch pad and you would experience a better medium to control your Apple Television. The other functions from this touch interface also include scroll, select and navigation of the screen without too much of efforts. So, forget pressing of buttons and take control of your television through swipe action.

Well, with so much of features and specialties on board, Apple TV also comes with the very innovative Focus Engine which serves as an interfacing medium between users and tvOS application. This is in general a basic concept for tvOS that would provide visual updates when the user would navigate a tvOS by moving focus from one application to the other.

It has been specifically designed to initialize the focus update at respective time as per the functionality of application such as app launch and terminated. Things apart, developers could also get the focus updates from focus engines.

To conclude, this ultimate device is one more result of extreme engineering of iOS application development from Apple and would soon hit the stores in October this year to revolutionize the trend. Well, on looking to the features and specifications, one thing could be said that the “idiot box” doesn’t seem to be idiot anymore now. It has moved to the new heights bringing great scopes for users as well as for iOS developers.