What to Expect in Microsoft.NET in 2015 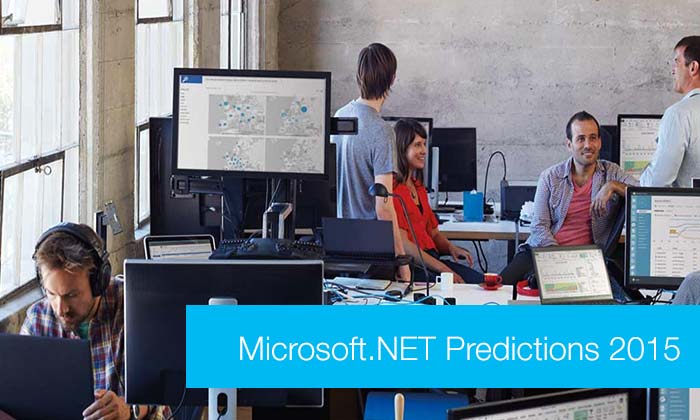 Celebrations are going all around the world to welcome 2015. Annual meetings and conferences are held to brainstorm what worked in 2014 and what should be worked in 2015. There are around 6 million professional .NET Developers in the world and Microsoft is also planning big for them. 2015 is going to be a rocking year for these developers. Tons of new things coming and plenty of changes are planned for 2015. The new management has understood the trend and is trying to make up for the lost ground now and in time. And history says whenever Microsoft comes back, it is always comes in style!

So, let’s have a look what can be game changing plans of Microsoft especially in .NET as a technology in 2015.

Microsoft has always been about giving platform to build your own product.

“When I think about what Apple does, what Google does and what Microsoft does, therein lies perhaps the simplest answer to why these three identities are actually pretty distinct. To me Apple’s very, very clear, and, in fact, I think Tim Cook did a great job of even describing that very recently where he said they sell devices and that’s what Apple is all about. And Google is about being, it’s about data or it’s about advertising, it is about serving you ads in a tasteful way, and they’ve done a great job of that business.

Whereas in our case, our identity really is about empowering others to build products. It’s not really about us and our products. Of course, we have a revenue model and a business model, but to me the place where Microsoft can be distinct and where it comes naturally to us more so than anything else is from the creator of a document to a developer writing an app, to anyone else who is in the business of actually their own creation we want to be the tools provider, the platform provider. That’s the core identity, and productivity to me that’s why it has deep meaning.”

So, Making Microsoft identity more powerful than ever, they are planning big. Below are some highlights about what to expect from Microsoft for .NET in 2015.

As a .NET Developer, I always face one of the most common problem with .NET that is, “there are always prerequisites”. Either you shipped it with your product or you make it part of your documents and mention as software requirements. There are always some prerequisites. Either it is .NET framework or SQL Server or some assemblies. This makes developers vulnerable. Remember the quote “But, It works on my machine… ”. It is due to this.

With Visual Studio 2015, Microsoft is announcing AspNet vNext. This will enables developers a self-contained package of your product. Thus, now you can build a product in such a way that single Release folder can work anywhere without any machine dependency. Imagine it is so painless, that your sales executives needs no technical knowledge about the demo machine or even they do not need to check whether the machine has all prerequisites installed or not. They can just give the demo of your product from the memory stick.

So, how did Microsoft do this magic? Initially what Microsoft did was, that with .NET framework, they shipped all the assemblies which is targeted to different types of projects. But now they have modularized it. So if you are building class library, it contains only assemblies which are required for Class Libraries. Which is a 10-11 Mb package. Sounds fantastic! Isn’t it?

The project in which I am working currently has 110 projects. (Yes! We need those all in single solution.) And when I am compiling it, it is taking 2-3 minutes, which is too much. When I complained about it to my manager, he shared his experience it took a complete night to build a single solution while he was developing.

This is the reason why I love to work in HTML and in scripting language because I can make runtime changes. I just edit it and hit refresh. Imagine if you can do same with your C# class. Yes, your dream is going to come true. Visual Studio 2015 is going to support Roslyn as a compiler which is superfast. So, now after only completion/save of changes in any C# Class, iisexpress will restart automatically (Sounds scary but it isn’t. due to Rosyln). And so, now you can change your C# Class and hit refresh to see the changes. The build/compile step is completely removed. Of course, you will be still able to compile, but it is just to check spell error or checking lint errors.

Along with this, Microsoft has done many optimizations in their current framework. Like initially their HTTP Context object had around 30kb of memory, which will be now around 2kb only, which is excellent. This is just single example. There are many more similar improvements that have been planned for Visual Studio 2015 and .Net Framework 4.6.

“I would love to change the world, but they won’t give me the source code”

When I read this quote long time before, I felt the same pain for .NET. But now Microsoft has understood the pain of .NET developer community and thus they made .NET open source. There are TechEd Conferences going on. Many forums are discussing predictions and rumors on how these changes will affect the world. Microsoft understands the power of open source and the only way of survival. I get goose bumps imagining that we will have access to the actual .NET core, ASP.NET MVC and how other technologies are built around it. We will actually be able to debug that code and modify and ship and our own version of ASP.NET MVC and the list goes on and on. I am already feeling the power but also remembering that “with great power comes great responsibilities”!

In 2015, Cloud offering will decide the next big tech company. I will give an outline on: Why Windows Azure has a fair chance to win the cloud war?

According to Q1 -2014 Research by Synergy Research Group, Microsoft is already on the 2nd Spot.

Microsoft always has had an advantage of cutting the prices because they have a strong product line, which is already generating most of the revenue for them, whereas Amazon lacks this luxury.

Big data is already the big word from last several years, but there are very few products have been built around it. And most of them are proof-of-concepts. New Azure services provides a number of Big Data services like Machine Learning, Strom, Stream analysis, Live media streaming, and Site recovery through replication. These all services are ready to promote and in 2015, Microsoft is planning lots of promotion around them.

Microsoft has announced its partnership with SalesForce and Dropbox to have an integration between Office 365 and Azure. This will continue in 2015 and Microsoft will move from premium to “freemuim”, from propriety Software Company to open source cloud Service Company. Microsoft now understands the future of hosting everything and not just Microsoft designed and engineered products.

When Microsoft will strike with all of its force on cloud, AWS will give a tough fight but chances are, Windows Azure will win this war. Even though Amazon is the current leader in cloud services, they have a big competition ahead.

These are just some key highlights of Microsoft.NET in 2015. Feel free to add your valuable comments.