Everything You Must Know About Spring Boot Application From The Scratch
Enterprise
by Jwalit Parmar  April 5, 2016

Everything You Must Know About Spring Boot Application From The Scratch

What is Spring framework?

The Spring Framework, as discussed earlier, is an application framework and the inversion of the control container as well for the Java platform. Being an open source framework, the main features of Spring framework is not to impose any specific programming model and instead it is being viewed as a replacement or alternative or even addition to the Enterprise JavaBeans (EJB) model. The Spring Boot is considered as a completely new project from the Pivotal Team and is a framework developed on the top of existing framework.

What is Spring Boot application?

Being a Spring’s convention-over-configuration solution, the Spring Boot application helps in creating stand-alone, production-grade Spring-based applications that one can “just run”. It simplifies the process for configuring as well as deploying the spring applications.

As a result, creating new Spring application becomes easier just as opening it in your browser and entering the metadata for the project (including Maven/Gradle attributes, version, language and much more). Further, you can select the dependencies according to the project needs and finally you can click on “Generate Project”.

A glance at fundamental goals of Spring Boot application:

Below we have presented a simple “Welcome to spring boot demo example” code snippet for your reference:

The following code with a command line tool can be used to prototype with Spring. If you are a Java developer, you can use start.spring.io for generating basic project. A simple “Welcome to spring boot demo example” code snippet is being described below:

The Spring Boot can result into number of benefits that can be listed as follows: 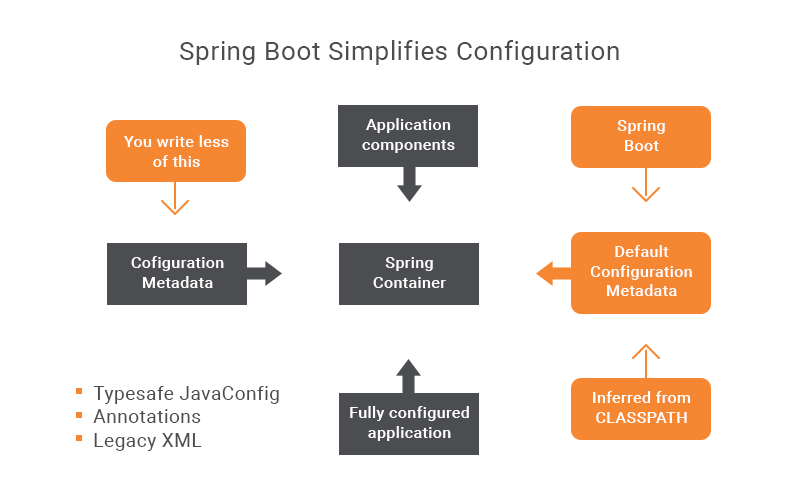 Well, till now you have got enough information about what Spring Boot application is and what are its benefits. You must be thinking whether to opt for this Java application development for your project or not, right?? So, in order to eliminate such confusions, below we have listed some of the compelling reasons for you to look forward and implement Spring Boot in your project. Let’s have a look at those compelling reasons:

Top reasons to opt Spring Boot for your web applications:

Reason #2: It offers quick standalone mode along with auto configuration

Reason #3: It offers a highly opinionated as well as well tested set of dependencies that works great with Spring ecosystem for various projects.

Thus, these were some of the great reasons to opt for the Spring Boot application framework for your projects.

At present, the Spring Boot framework is drastically changing the Spring-Java Based Applications Programming model into the new programming model. We could expect more development and advancements in this technology in the near future as well.

In addition to that, with the above post, we could conclude that- Spring Boot = Existing Spring Framework + Embedded HTTP Servers – XML or Annotations.